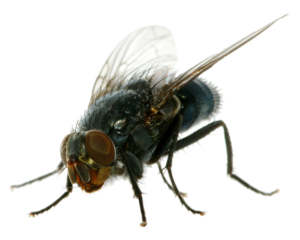 Houseflies survive only with humans in colder climates. They have a tendency to aggregate and are difficult to dispose of. They are capable of carrying over 100 pathogens, such as those causing typhoid, cholera, salmonellosis, bacillary dysentery, tuberculosis, anthrax, ophthalmia, and parasitic worms. Some strains have become immune to most common insecticides.

House flies feed on liquid or semiliquid substances beside solid material which has been softened by saliva or vomit. Because of their large intake of food, they deposit feces constantly, one of the factors that makes the insect a dangerous carrier of pathogens. Although they are domestic flies, usually confined to human habitations, they can fly for several miles from the breeding place. They are active only in daytime, and rest at night, e.g., at the corners of rooms, ceiling hangings, cellars, and barns, where they can survive the coldest winters by hibernation, and when spring arrives, adult flies are seen only a few days after the first thaw.